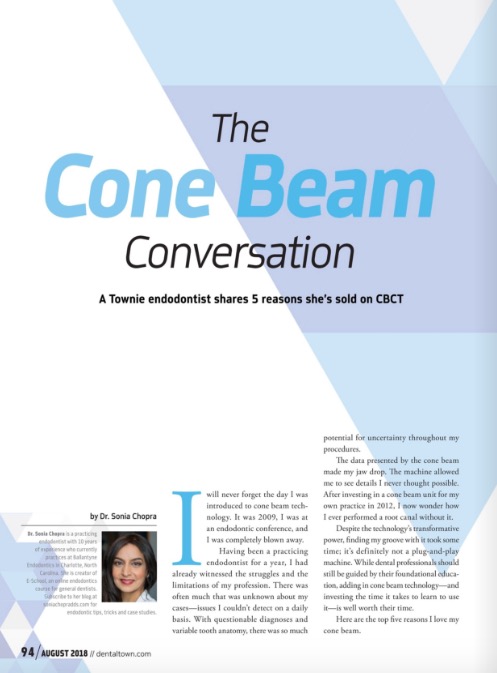 I am so excited that I was asked to write this article for DentalTown as part of my mission to spread endodontic information to general dentists. I am sharing a portion of the article here and you can continue to read in Dental Town’s August 2018 issue.

I will never forget the day I was first introduced to cone beam technology. It was 2009, I was at an endodontic conference, and I was completely blown away.

Having been a practicing endodontist for a year, I had already witnessed the struggles and the limitations of my profession. There was often much that was unknown about my cases, so many issues I couldn’t detect on a daily basis. With questionable diagnoses and variable tooth anatomy, there was so much potential for uncertainty throughout my procedures.

The data presented by the cone beam made my jaw drop. The machine allowed me to see details I never thought possible. After investing in a cone beam unit for my own practice in 2012, I now wonder how I ever performed a root canal without it!

Despite its transformative power, finding my groove with this technology took some time; it’s definitely not a plug-and-play machine. While dental professionals should still be guided by their foundational education, adding in cone beam technology, and investing the time it takes to  learn to use it, is well worth their time.

So, read on for the top five reasons I love my cone beam.

Reason 1: It aids in early diagnosis and early detection of disease

How many times has a patient arrived at your office with pain, yet your radiograph tells you nothing — and they can’t determine which tooth is hurting them? Periapical radiographs can be limiting because they don’t always tell the whole story. We need a certain amount of cortical bone to break down before a periapical radiolucency will ever show up on an x-ray. Add some referred pain to the mix, and you really have a diagnostic dilemma.

This is something I see all day, every day. It’s not just frustrating to the patient; it’s frustrating for me! The horrible feeling of not being able to help my patients right away plagued me for years, until I invested in my cone beam.

Using the cone beam means I don’t have to wait for bony breakdown of the cortical plate to occur. Now, I can see right through that buccal bone and view the bone immediately adjacent to the root. The guessing game is officially over. Instead of making my patient wait for the symptoms to get worse before I treat, I can treat right away. Let’s take a look at an example. 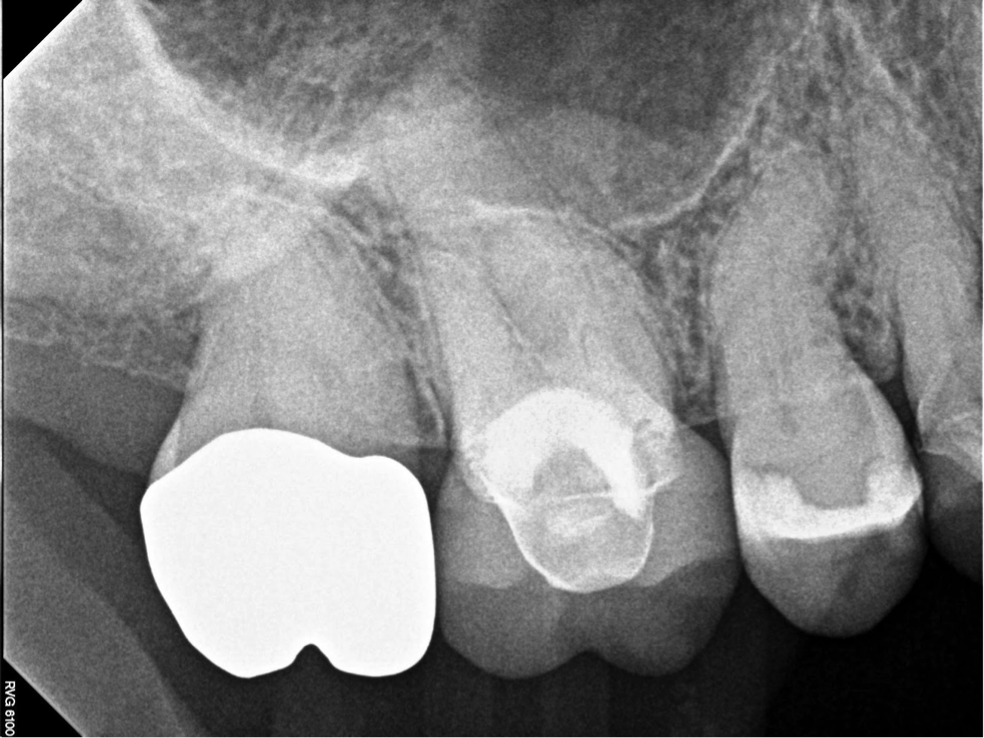 Figure 1 is a PA of a 56-year-old woman who had pain when she saw her general dentist. Her dentist recommended antibiotics, ibuprofen and hydrocodone due to her level of pain. Well, by the time she got to me, she had absolutely no pain, but only tooth #2 (out of #2 – #5) had a response to cold. I could not assume that all of her teeth were necrotic.

In this case, I took a cone beam to see if I could find any evidence of pathology. I scrolled through the entire volume of the cone beam in every plane. Slice by slice, I looked for any irregularities in the teeth and any resorption of bone. The entire scan looked fine until I got to the disto-buccal and palatal roots of tooth #3, where I could see a very small radiolucency around these roots (shown in Fig. 2-4 yellow arrows). The sinus membrane was thickened around the area (Fig. 4 green arrows), as well. This was a sure sign that tooth #3 was necrotic and I could be confident in my diagnosis so my patient didn’t have to wait for the pain to return before treatment. 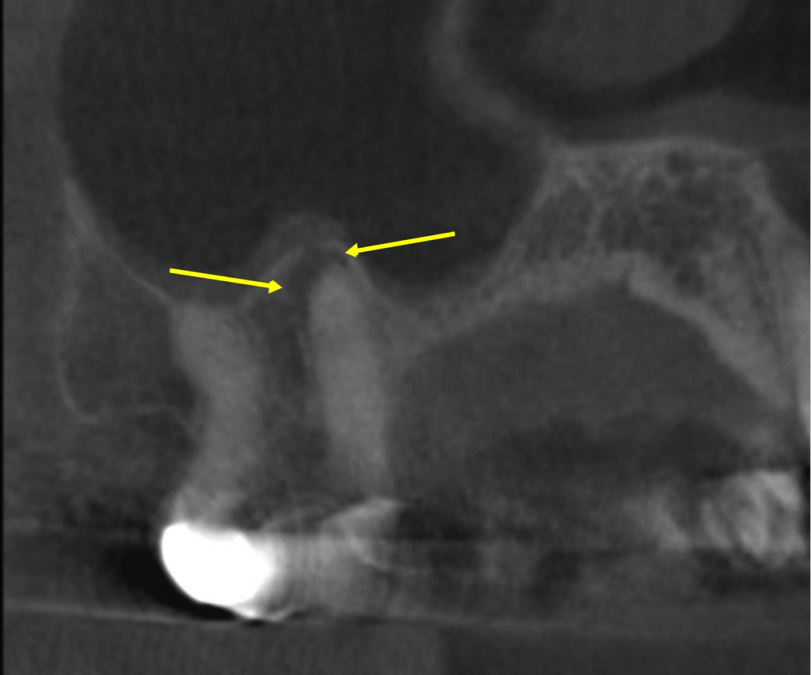 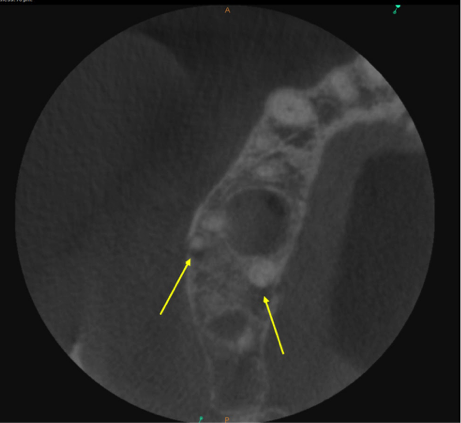 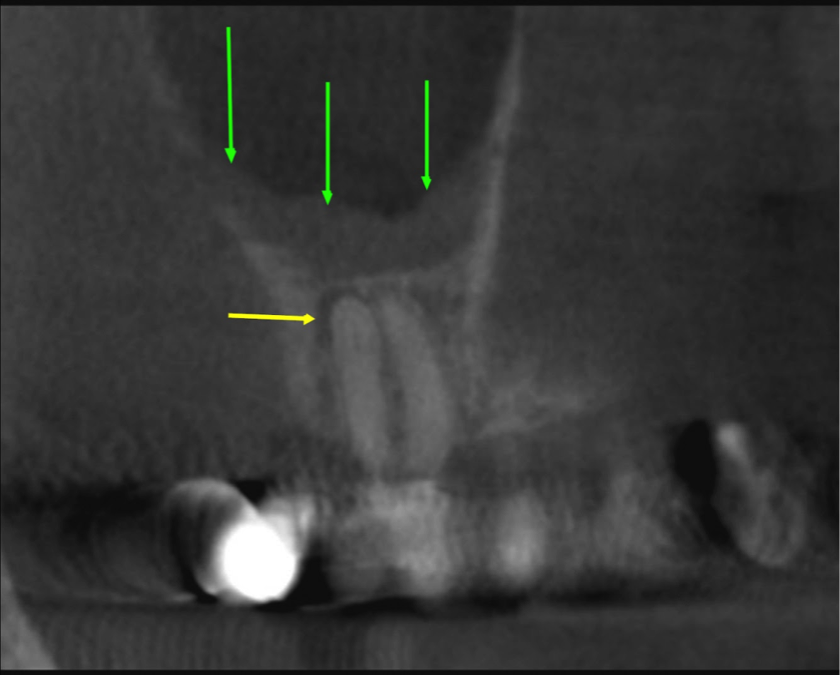 Your patients will not always be the most reliable testers, through no fault of their own! This is a perfect example of a patient case where my cone beam helps me diagnose disease when my traditional testing and imaging are inconclusive. Her story of having a painful episode is usually a sign that a nerve somewhere has died, and it was through my cone beam that I was able to diagnose appropriately.

Reason 2: It reveals the true etiology of root canal failure

When I see a root canal that is failing, I always want to know why. My cone beam always tells me the whole story.  Figure 5 is an example of a patient with a failed root canal on tooth #19. 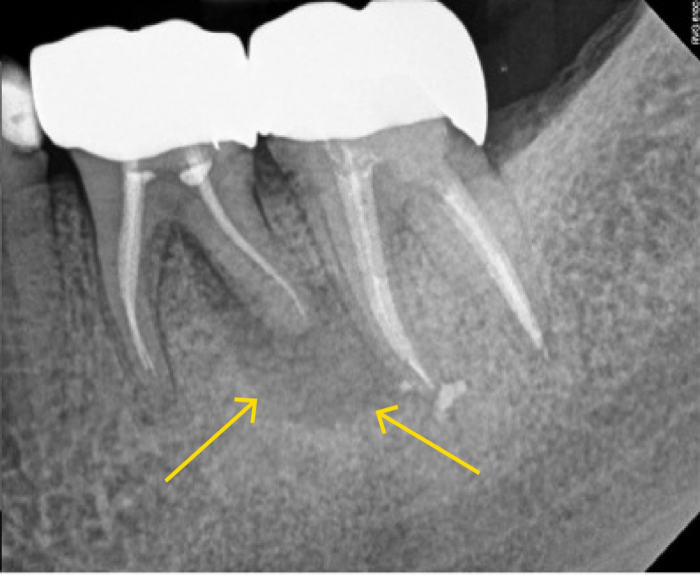 The tooth has that typical J-shaped radiolucency around the distal root, and many would consider this tooth fractured. But the axial slice of the CBCT (Fig. 6) shows the roadmap of the tooth and you can clearly see a missed disto-lingual canal. The missed canal is the true etiology of failure. In reality, there’s still bacteria in the tooth, and the tooth is not fractured. In Figure 8, you see how the tooth should really look when it’s obturated.

The two cardinal rules of root canal therapy were applied — finding all the canals and getting to the end of every canal — and two years later (Fig. 9-a 2 year recall PA radiograph), and now the bone is filling back in. This bone regeneration can also be seen in the cone beam images (Fig. 10 and 11-preoperative and 2 year recall images side by side to observe the bone regeneration). 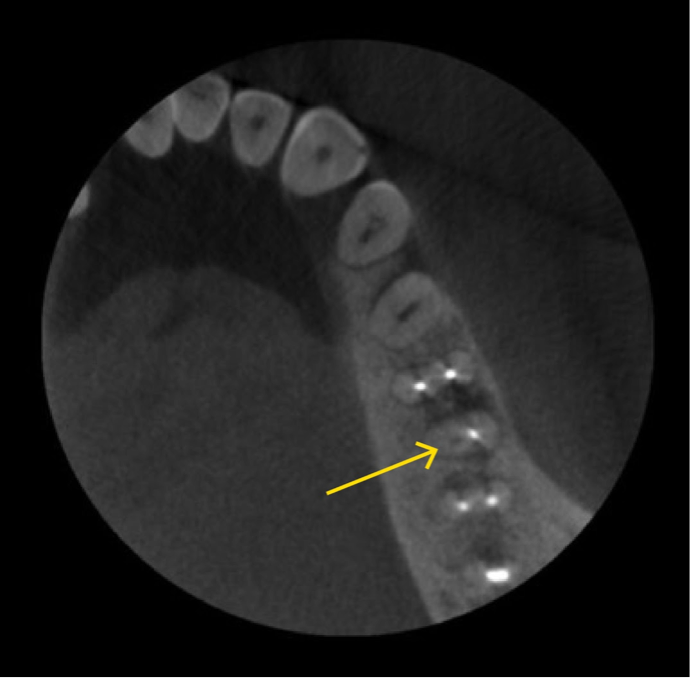 Before and after x-rays: 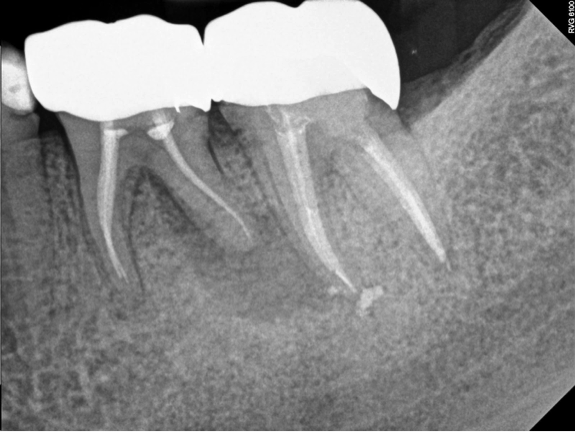 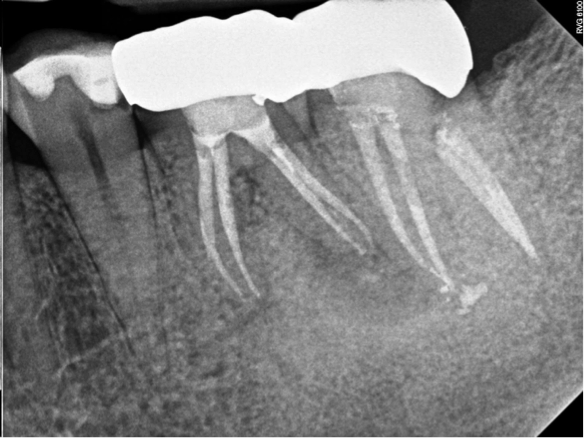 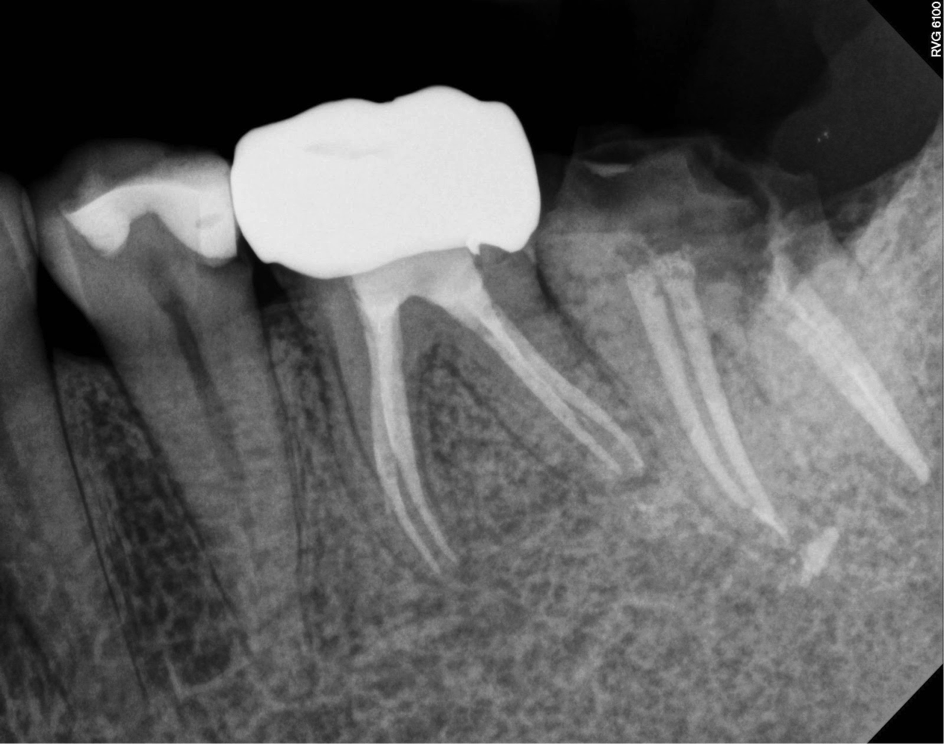 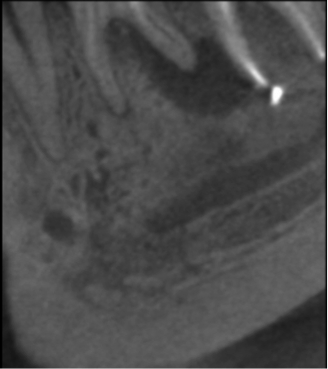 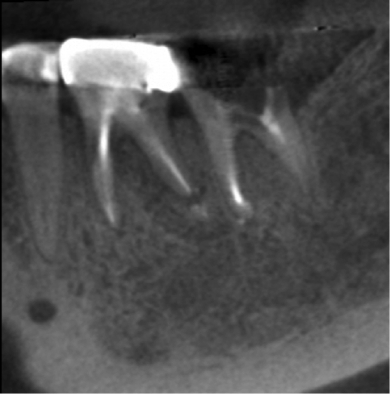 The cone beam tells you exactly what you need to find, with no more guessing.  Once you have a clear diagnosis, you know exactly what to fix and you can heal the tooth. Don’t assume it’s cracked and send it for extraction; it might not be cracked at all. So don’t give up! As dentists, saving teeth is our game.