Avoiding a Missed Root During a Root Canal

What’s the best way to give root canals a bad reputation? A missed root during root canal.

As an endodontist and educator, one of my primary responsibilities is to continue to dispel the harmful myths that have emerged and persisted around root canals. For decades, the dental community has had to contend with literature and even full-length documentaries that drive fear around root canals and what they do to our bodies. Most of these false claims are grounded in the idea that root canals never truly heal—they will always be home to harmful bacteria that will only cause further pain and infection.

If that were true, I would understand why so many patients assume they’ll need to have their teeth extracted! Fortunately, though, all those fears about root canals are  totally unfounded. As every trained endodontist knows, a properly performed root canal is perfectly safe, and has the added benefit of balancing out a patient’s microbiome while saving their natural teeth.

However, as with any medical procedure, it is true that a failed root canal can cause complications later on. That’s why it’s imperative for any dentist to stick to the two cardinal rules of root canals:

When you follow these two rules to the letter, your patient’s root canal will heal just fine and they’ll become a believer in the power of endo. When you don’t … that’s when the problems start. And that’s exactly what happened in this tooth story.

The Story of a Missed Root During a Root Canal

The patient in this tooth story was a 28-year-old woman. About a year and a half prior to seeing me, her general dentist performed a root canal on her upper premolar. Although the root canal had seemed like a success, the patient was now experiencing a painful bump around the previously treated tooth.

When I looked at the patient’s periapical X-ray (Image 1), everything appeared to be in order. But upon clinical evaluation, I found the tooth to have pain to percussion and biting. I knew it was time to take a second look with my cone beam.

When I reviewed the CBCT scans (Images 2 and 3), I quickly found the source of the patient’s discomfort—there was a missed root during the root canal. Somehow over the course of the original procedure, this patient’s dentist had failed to identify—or to treat—a DB root.

I want to be clear: this tooth story isn’t about shaming this patient’s general dentist. Instead, it’s yet another example of how much it pays off to invest in endodontic technology. That missed root during the root canal was almost impossible to see using traditional X-rays, but it was clear and defined in the 3-dimensional cone beam scan. Having a cone beam on hand could have prevented this failed root canal and prolonged suffering on the part of the patient.

With the help of my CBCT, I was able to diagnose the patient’s previously treated tooth with symptomatic apical periodontitis.

With a diagnosis in hand, I got started on retreating the patient’s tooth. If you take a look at the coronal view of the cone beam scan (Image 4), you’ll see I really had my work cut out for me! That image shows the substantial bone resorption around the root that resulted from the tooth infection. It also shows how the tooth infection thickened the maxillary sinus membrane. (Both of those symptoms normally resolve themselves after retreatment.)

I opened the patient’s tooth back up and removed the restorative filling material. Then I got to work with my file. Image 5 shows that working file in the untreated DB root, identifying its correct length and location. As with any endodontic retreatment, I made sure to clean and fill all of the canals, even the previously treated ones. The last thing I wanted was for this tooth to get another infection! You can see all the cleaned and refilled canals in the conefit X-ray (Image 6).

Lastly, here’s an image of the final filling and obturation of the retreated root canal. 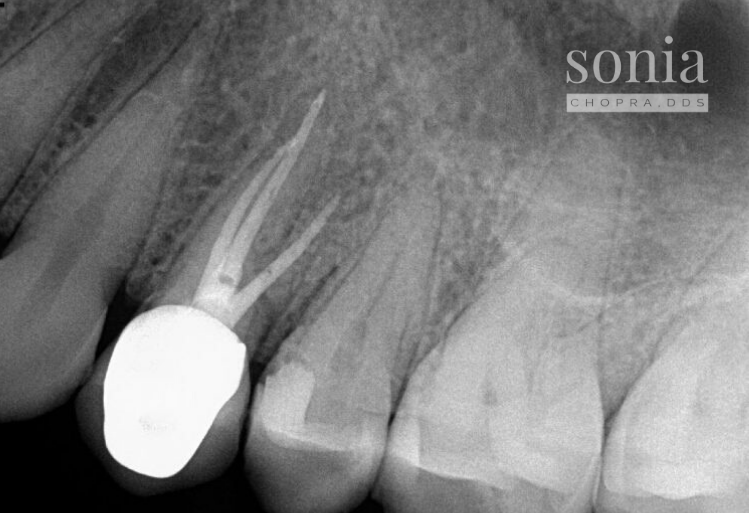 How to avoid missed roots during a root canal

I am thrilled to report that this patient’s second root canal was entirely successful—her bone regenerated, and that annoying bump went away! But even though this tooth story had a happy ending, it still makes me a little sad. That poor patient never should have had to step into my office, and I hate to think that her initial experience of the failed root canal may have contributed to some of the harmful myths around their efficacy.

So, in the spirit of endodontic education, let’s do a recap of the key takeaways from this tooth story.

All that being said, a missed root during a root canal can happen to the best of us. When it does, it’s even more imperative to retreat the tooth quickly and effectively!

What experiences have you had with missed roots in your practice? I’d love to hear about it in the comments!