Several years ago,  a 9-year-old boy came to my office with some dental trauma after a baseball accident.  A baseball had hit him square in the mouth and his teeth were loose. His mom had noticed some discoloration of teeth #8 and 9, but he had no pain or sensitivity.  She was mostly just concerned about the discoloration. As a further complication, her son had a history of Hemophilia A. 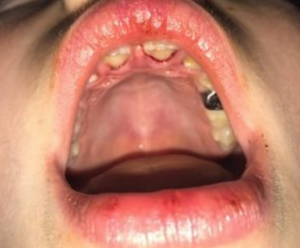 When looking into the case, I saw that the teeth had been subluxated.  You could see some gingival hemorrhage in the sulcus. There was some mobility, but the teeth were not displaced (although they were very tender to percussion). I performed some diagnostic tests that showed that teeth #8 and 9 had a normal response to cold.  His diagnosis was Normal Pulp and Symptomatic Apical Periodontitis #8 and 9. 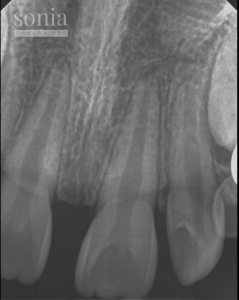 I apologize for my pre-operative radiograph and photograph, but it was difficult to take the x-rays because the patient was very uncomfortable. He was clearly a bit banged up from the accident.

Since the teeth still had slightly open apices, my goal was to try and keep the teeth vital as long as we could.  My treatment plan was to monitor him and continue follow-ups. The mom was instructed to watch for discoloration and any sensitivities during the follow-up period.

Following Up a Year Later

One year later, the patient came back and was still asymptomatic. The teeth also didn’t appear to change in color. The teeth still felt cold (although not very strong) and, at this point, had no pain to percussion.  There was no sign of endodontic pathology, but there were other changes that I saw in the radiograph — the lumens of the canal space were starting to calcify. 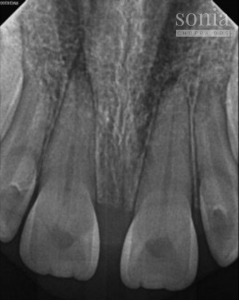 A few things can happen as a result of dental trauma: 1) things can remain unchanged, 2) the nerve can undergo necrosis, or 3) a tooth can undergo pulpal metamorphosis / pulp canal obliteration.

This case is a perfect example of what I mean by pulp canal obliteration. You can see that the lumens of #7 and 10 have not really changed, so something metamorphic is definitely going on.

Now the question — what do you do for treatment? Do you keep watching the teeth and not do a treatment? Or do you intervene now before the canals completely calcify?

Monitoring the teeth appears to be the more conservative treatment unless you look at this case in another way. If the canals completely calcify, then the risk of procedural errors like root perforation go up tremendously.  The teeth may also start to change color because of the extra dentin deposition, so there could be an aesthetic concern in the future. The risk for apical surgery also goes up, and this, in my opinion, is not that conservative, especially for a little boy. The good news is that root canal therapy is pretty conservative now as opposed to one year ago.  The dentin thickness is greater on the sides of the canal, and thus, the tooth is stronger.

To Treat or Not to Treat

The research shows that cases like these go necrotic and require endodontic therapy only about 15% of the time.  I know that the chances are low, but when treatment is simple and straightforward (as it is in this case), I prefer to do treatment sooner than later. However, it’s not my child and it’s not my body.  I was very aware that his mom might not be sure of how she’d want to proceed.

So what did I do?  I presented the mother the treatment options and told her that she should really think about it. I could tell it was a lot for her digest.  I really wanted her to take her time, so I reassured her that we weren’t in a hurry to make a treatment decision and that she really needed to put some thought into it.

My questions are:  What would you do if this was your child? What would you have done if it were your patient? I would love to hear your suggestions below.