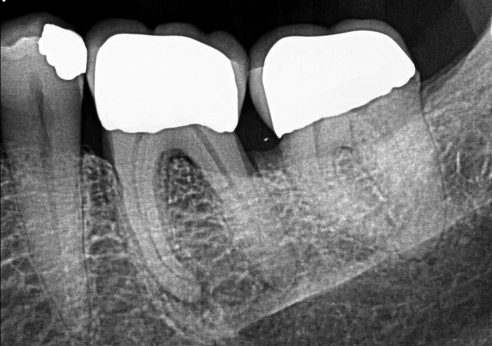 Setting expectations for your patients is SO important. Here is a radiograph and I want you to tell me what you see. I see some restorations, two crowns on teeth #18 and 19, and an amalgam restoration on #20. I also see some periodontal bone loss and what is about to become some furcation involvement on tooth #19.  I also see a thickened periodontal ligament and a diffuse lamina dura on the mesial root of #19. So, tell me what would be in your conversation with this patient?

MY first question to this patient was “What is bothering you?”.  The patient said “I have had some pain for about 9 months. I can’t really pinpoint it, but it hurts to cold and biting.”  So with that response, what is your treatment plan?

Before you just jump right in and say do a root canal on tooth #19, let’s do some diagnostic tests.  Remember, you can’t treat just from the radiograph, so let’s do the tests and see what we find.

In this case, all probings were within normal limits.  Tooth #19 had no response to cold and was tender to percussion.  Tooth #18 had a lingering response to cold and no pain to percussion. And just for the record, tooth #31 (which also had a crown) was tested and did not have as severe of a response as #18.  So, I was able to diagnose tooth #18 with Symptomatic Irreversible Pulpitis with a Normal Apical Periodontium, and tooth #19 with a Necrotic Pulp and Symptomatic Apical Periodontitis.

Since I found two problems, I asked the patient, “Well what hurts you the most? Is it Hot, Cold or Biting?”  His answer was “cold”. So that tells me that #18 hurts him more, and #19 is in second place.

This information and diagnosis not only helps me sequence my treatment, but it also helps me guide my conversation.  In cases like these, I end up doing my tests over again to prove a point to the patient. I showed him that #19, if normal, would also feel cold, and then I tap on that tooth again to show him that until that tooth is treated, he will continue to have pain to biting.  He also knows that no matter how hard we try, that tooth will never feel cold, so if I treat this tooth first, his complaint of pain to cold is not going to disappear. I then do the same thing with tooth #18 and show him that it doesn’t hurt when I percuss on it, but when I zing it with cold he levitates in my chair.

So, NOW my patient understands that he NEEDS two root canals, accepts that treatment, and schedules his appointment. He also knows what to expect after treatment, and he won’t go calling me because he thinks something is wrong because he still can’t chew on that side.

Now, I am usually the one to say that it is most often only one tooth that needs treatment, but this situation was unique and he actually DOES need two root canals.  His response to cold was off the charts and so we started with that tooth first (#18) since that is what he identified as his chief complaint.

So, the moral of the story is listen to your patients, and use your diagnostic tools to your advantage. Educate your patients so that you can set and manage your patient’s expectations!!