A Tale of Child Tooth Trauma and Saving Teeth

I want to share a tooth story about a young boy who avulsed his tooth. Buckle in.

Here’s the gist: he’d been playing with a friend, they were spinning around, his friend let go, and BAM! His face met the ground, which avulsed tooth #8. Sounds like a bad day, right?

His mom was understandably frantic and couldn’t find any dentist who’d immediately help. She had the foresight to put the tooth back in, but she was worried that her son might choke on it while he was sleeping, so she took the tooth back out of the socket and placed it in milk overnight.

Not an ideal situation, but at least she tried!

First thing in the morning, she attempted to put it back in, but the clot prevented her from doing so. She put the tooth back in the milk and finally managed to see their dentist that same day.

Her dentist reimplanted the tooth and then splinted it in place with NiTi ortho wire. They monitored the tooth for some time “to see if the tooth would heal on its own.”

Over a month later, there was evidence of inflammatory resorption and bone loss. That’s why my office received the referral. In the image, you can see the apical resorption and lateral root resorption, along with some bone loss. 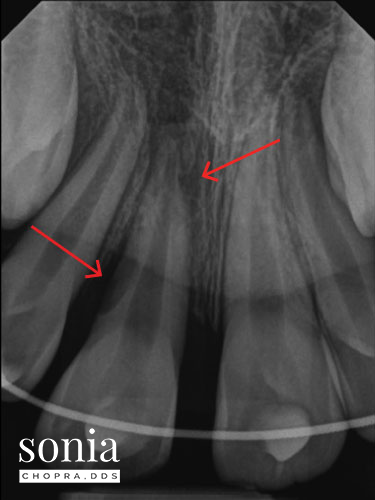 So what can we learn from this case of child tooth trauma?

I admit I’m very sensitive when it comes to child patients, because I feel like teeth are such an important part of making someone who they are. I can’t imagine what life would have been like without my front tooth growing up; it would’ve had a huge impact on my self-esteem!

I won’t lie, I got pretty fired up when I met this boy! I feel like several pieces of his case were mismanaged, and I really had to bite my tongue so as not to lose it on somebody.

I thought to myself, If that dentist didn’t know the trauma guidelines, then chances are, others don’t know them, either.

This is an important case to share because I think dentists and the general public alike can learn many lessons here. My hope is we can save children’s teeth from this blog post!

First, the extraoral dry time was too long. Based on this information alone, you have to prepare the parent to expect some resorption and possible loss of tooth. The good news is that the patient’s mother did put the tooth back in; she took it back out at night and the next day, during which time she put it in milk.

Educate your patients that milk will buy avulsed teeth about 6 hours, and the best thing to do is put the tooth back in the socket. Educate your patients and the public on what to do when a tooth is avulsed. We could save smiles everywhere with this one little piece of information.

Second, the dentist used NiTi ortho wire as a splint, and the splint was in place too long. Additionally, splinting too long can cause replacement resorption, so a splint should not be used any longer than necessary.

Studies show that, in cases like this, the best results come from using a physiologic splint, like a monofilament fishing line. This allows for some movement of the PDL and decreases the risk of replacement resorption (ankylosis). With an avulsion, you only need to splint for about 2 weeks, and definitely no longer than 4 weeks. Splinting too long can also increase your chances of resorption.

Third, waiting to do a root canal as long as occurred in this case can cause inflammatory resorption.

After an avulsion with a fully formed root, root canal therapy should be started around 10-14 days after the trauma.

We were able to start the boy’s treatment right away when he was referred to my office. We immediately removed the splint and did a pulpal debridement of the canal to eliminate the bacteria. Next, we placed calcium hydroxide paste in the canal to medicate over time. The calcium hydroxide will sit in the tooth for one month, after which we’ll switch to a USP calcium hydroxide mix to pack into the canal. That will sit for a few more months, until we see the PDL to re-establish itself. Then and only then, can you feel confident to obturate a tooth like this.

Takeaways from a case of child tooth trauma

I believe in you. Together, we can prevent kids like this one from living through their formative years without their teeth. Nobody wants that!

What will you do differently after reading this blog? I’d love to hear your action items.

I’ll give you a freebie if you need some help thinking about your takeaways. You can always enroll in E-School, because we have an entire module dedicated to tooth trauma! It will guide you through these tricky cases, every time! You can get started with E-School today.