A lot of times when we’re doing a root canal you have two canals that are superimposed on each other, specifically the buccal and the lingual canals in a tooth like a lower molar. And you don’t know which canal is which because you’re looking at a 2 dimensional image of a 3 dimensional object. So when you have two canals that are right on top of each other, inside one root, it’s really easy to get confused on which canal is which. So to illustrate, just put your hands up and make a peace sign, and then turn it to the side and look at it — you can see that it looks like just there’s one canal there. But really there’s two. So how do you identify when you’re doing root canal therapy which canal is which? The SLOB rule was created to help you understand that.

Let me show you this example here. I was working on a maxillary premolar and in this first x-ray it shows that one of my gutta purcha points was right on the money, and the other one was a little bit long. 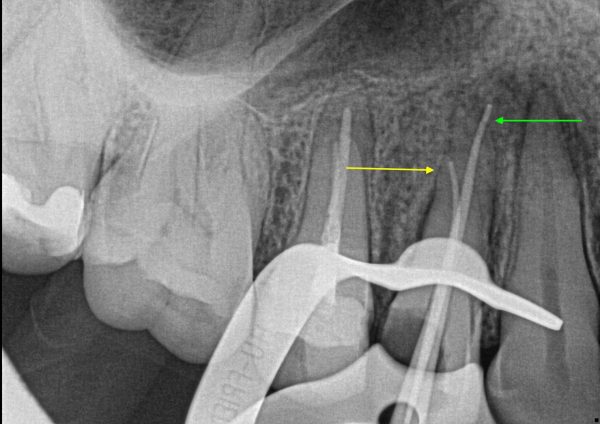 So now I need to know without taking too many radiographs which canal needs to be adjusted. But it’s really difficult to figure that out from this periapical radiograph, but if you do the SLOB rule right you’re going to see that it’s really efficient and it will make your root canals that much easier. Plus you can train your team how to do it and you can radiate your patient a whole lot less if you do it this way. 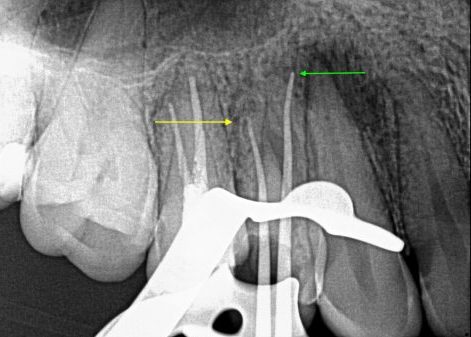 So now you see that you can clearly identify that there’s two different roots in this tooth, and now I need to know which canal needs to be adjusted. So based on how I actually move the x-ray tube head I make that decision.

So let’s go back to our peace sign where we see our two canals that are superimposed on each other. And let’s pretend that my head is the x-ray tube head and we’re going to say the finger that’s closer to my face is the buccal canal and the finger that’s further away is the lingual canal. Now when I move my head to the right (we’re going to call that mesial, and the left will be distal) then you’re going to see which of those canals, buccal or lingual, moves with your tube head. So if I move my head to the right, or that x-ray tube is moving to the mesial, then one of these canals is now to the mesial, which is this one, which is my lingual. So if we remember what SLOB means, it’s Same Lingual Opposite Buccal, meaning the lingual canal follows the same path as the direction of your x-ray tube head.

So since my head moved mesial, the more mesial canal is going to be my lingual and the opposite one will be my buccal. So now I’m going to have my assistant Michelle show you exactly what we mean by that with the actual x-ray tube head and I’m going to play the patient. Pretend the x-ray sensor is in my mouth and we’re doing a lower molar x-ray. So she places a sensor in there and then she’s going to take one x- ray — you want that x-ray to be straight on. And then you want to press the button and you don’t want the patient to move and you don’t want the sensor to move. You will come right back to the patient and move that x-ray tube head either mesial or distal. And based on that, your x-ray is going to adjust based on that x-ray tube head movement. And I want you to see exactly how much she moves because the amount of movement that she does has an impact on how much of that split of the roots you’re going to get in your x-ray. It’s not an itty bitty move — it’s quite a drastic movement. But you always want to make sure that you’re still capturing that sensor in your x-ray. And remember you don’t want to adjust the sensor, you want to make sure the sensor stays in the same place so that you know you’re making an adjustment in that angulation.

Make sure you train your team on this and show them this video so they really understand what you’re talking about. And One other tip is when you are saving your x-ray if you can label it like “mesial conefit” or “distal confit”. So if you have to re-reference your x-ray later on you know exactly what direction your tube head moved so that you know which canal is which. That’s it for this SLOB rule. I hope you’ve found that easy. And now it’s simplified for you so you can really implement it tomorrow.